This is a text widget. The Text Widget allows you to add text or HTML to your sidebar. You can use a text widget to display text, links, images, HTML, or a combination of these. Edit them in the Widget section of the Customizer.
Posted on April 17, 2010 by with2ys

Note: This post may not be as controversial as I made it seem in my previous post. Sorry if this disappoints any of you.

There’s an episode of “South Park” (that I heard about from a friend of mine, because I obviously don’t watch that show, Mom) in which a cloud of smug threatens to destroy many of America’s large cities. The smug cloud forms over LA after George Clooney’s bloviating Oscar speech, and then slowly moves to towns like San Francisco and Seattle. It eventually hits the town of South Park, where the citizens have grown smug about their driving hybrid cars. The smug cloud doesn’t devastate the town like it does some of the other big cities, but it does cause extensive damage. According to my friend, after the cloud of smug hits South Park, the adults of South Park vow to return to their large, gas-guzzling SUVs to prevent another cloud of smug from ever harming their town again. The wise kids (whose names I don’t know since I never watch that show) tell the adults it’s okay to drive hybrid cars, in fact, it’s probably a good thing to do, they just need to not act so self-righteous when they do it. The adults decide that it would be asking them too much to drive hybrids without acting like smug jerks, so they decide that they will indeed just go back to their SUVs. 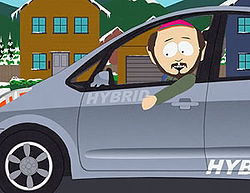 Hearing about this episode made me laugh, as I’ve wondered before about why so many environmentalists feel like they can’t just do what most of us do – recycle, use reusable bags at the grocery store, have gardens, not waste water, not use any more electricity than necessary – without telling us about it and how wonderful they are for doing it. It’s almost as though it wouldn’t even be worth doing if they didn’t get credit for it.

And then I saw this article that discusses a study done which suggests that people who do good things for the environment feel they have the right to do something bad. In the case of the study, two groups shopped online, one group at an environmentally-friendly site and the other at a typical site, and then after shopping both groups were put in situations where they had the opportunity to cheat and steal money. Researchers found that the group that shopped at the environmentally-friendly site was much more likely to steal than the other group. The study suggests that some people may feel like doing something good for the environment excuses bad behavior in another area of their lives.

My freshman Psych class was a long time ago, but I think I’ve got those hyper-intense environmentalists figured out – they’re just over-compensating for some long-held guilt. Sure, they’re probably not all thieves. (But really, what are carbon credits if not a form of theft?) Maybe they were mean in high school, or maybe they don’t pay their taxes. Maybe they feel badly about having a private-sector job and feel like they have to prove what good people they are in spite of that fact, so they trumpet their green bona-fides. Maybe they’re just carrying around good, old-fashioned white man’s guilt (the same guilt most of us have been carrying around since our time in public schools) and think that if they show everyone how they’re saving the planet everyone else won’t hate them so much.

What say you? Do I need to give back the A I got in freshman Psych, or do you think I’m correct? Or, are you a hyper-intense environmentalist who has now decided never to read my blog again? Let me know in the comments!

View all posts by with2ys